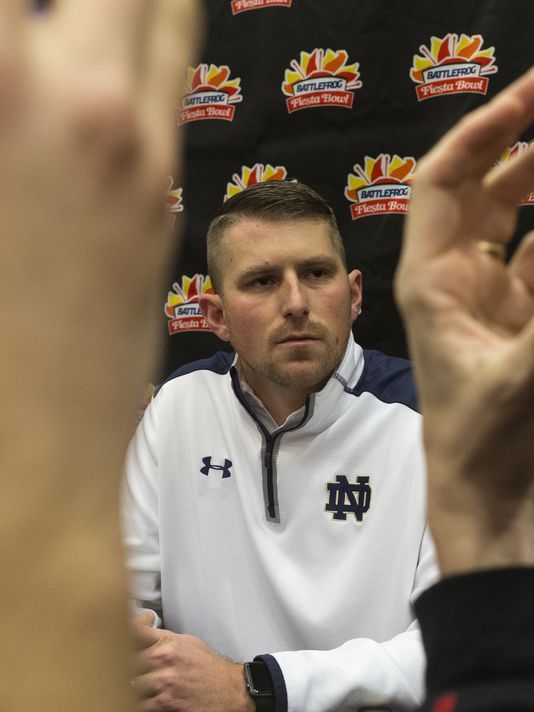 BOWLING GREEN, Ky. (AP) — Mike Sanford’s rush to get to his first head coaching job got him a speeding ticket on his way to Western Kentucky.

Sanford doesn’t expect any bumps in the road while keeping the Hilltoppers cruising at top speed.

Hours after WKU athletic director Todd Stewart announced Wednesday’s hiring of the former Notre Dame offensive coordinator, Sanford recalled his 2010 stopover at WKU during his journey through the coaching ranks.

“I realized right then and there that this is the job I would love to have at some point,” the 34-year-old Sanford said during his introductory news conference. “There are no words to quantify just how excited I am to be the head football coach here. That was evidenced by the speeding ticket as we transitioned from Indiana to Bowling Green. The ticket was only for five miles an hour (over the speed limit), so it wasn’t a big one.

“But it gives you an illustration of how excited we are to be here.”

Sanford received a four-year contract that pays an annual base salary of $800,000.

Sanford had spent the past two seasons as Notre Dame’s offensive coordinator and quarterbacks coach. He also coached QBs and was passing game coordinator at WKU in 2010 under Willie Taggart, part of a 12-year coaching career with stops at Stanford, Yale, UNLV and Boise State, where he played QB from 2000-04.

Defensive coordinator and interim coach Nick Holt will guide WKU (10-3) in the Boca Raton Bowl against Memphis (8-4) on Dec. 20 before handing the reins over to Sanford. Given his background and familiarity with the program and community, Stewart foresees a smooth transition on and off the field.

“Mike is not new to WKU and in 2010 he experienced firsthand the challenges this program was facing,” the AD said. “I said we would hire the best person to keep this train rolling, and I could not be happier or have more confidence in our next conductor.”

Sanford guided a Fighting Irish offense that averaged 466.4 yards per game in 2015 — the third-highest in program history — and 34.2 points while reaching the Fiesta Bowl. He also mentored QB Deshone Kizer, who passed for 2,925 yards and 26 touchdowns this season for Notre Dame (4-8); he also rushed for another 472 yards with eight scores.

The junior announced Monday that he will forego his senior season and enter the NFL draft.

Sanford’s offensive expertise comes in handy as he takes over WKU’s high-powered offense that Brohm built.

The Hilltoppers have averaged 44.6 points and 526.2 yards per game behind quarterbacks who completed 69 percent of their passes for nearly 357 yards per contest. WKU scored 131 touchdowns under the offense-minded Brohm.

Sanford promised an up-tempo, multiple offensive scheme at WKU with a focus on defense and added that’s important to do things that reflects the roster he has.

“Everything here is about the pursuit,” he said.

The WKU program has been a springboard to bigger jobs coaches who have recently run it. Besides Brohm’s departure to the Big Ten Conference, Bobby Petrino led WKU to an 8-4 mark in 2013 before returning for a second stint at Louisville and guiding the Cardinals’ entrance into the Atlantic Coast Conference.

WKU’s new coach thanked them and Taggart — hired last week at Oregon — for laying the groundwork. The married father of three again referred to his previous time here and sounded like someone ready to establish long-term roots.

Said Sanford, “I remember looking over at an assistant and saying, ‘is this not the best place to be?’”

Copyright 2016 The Associated Press. All rights reserved. This material may not be published, broadcast, rewritten or redistributed.

The NFL schedule release is one of the most hyped events that means relatively little in the grand scheme of things. That is, outside...
Read more

How soon can we expect the NFL rookie QBs to start?

With the 2021 NFL schedule now released and our games we’re looking forward to highlighted, we can now turn our attention to what might...
Read more
Advertisment

OLYMPIA, Wash — Editor's note: The above video previously aired on KING 5 in May 2021. Washington Gov. Jay Inslee has signed...

Washington state troopers said they are investigating if the driver was impaired during the incident. SEATTLE — A driver is in custody after...