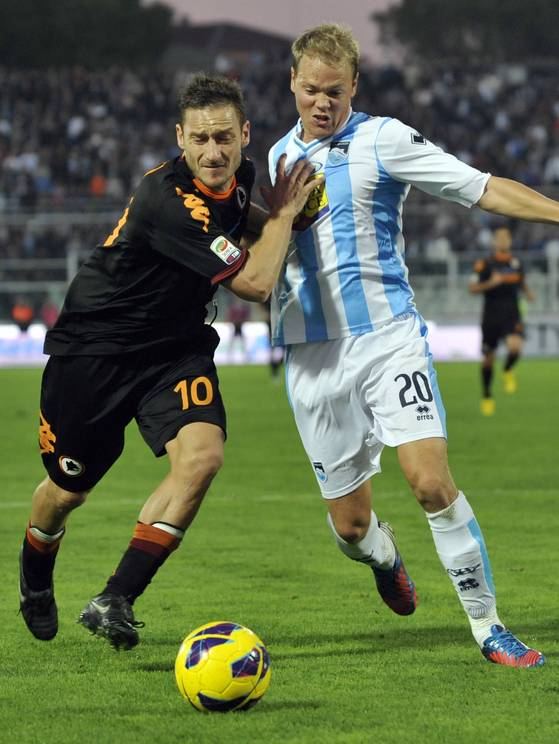 AS Roma forward Francesco Totti, left, and Pescara Danish midfielder Matti Lund Nielsen vie for the ball during a Serie A soccer match between Pescara and AS Roma, at the Adriatico stadium in Pescara, Italy, Sunday, Nov. 25, 2012.(Photo: Sandro Perozzi, AP)

MILAN (AP) — Roma won 1-0 at struggling Pescara in the Italian league on Sunday to mark a happy return for coach Zdenek Zeman to the club he steered to promotion as Serie B winners last season.

Mattia Destro gave Roma the lead in the fifth minute and could have added to his tally but missed several clear chances.

Pescara went close to the equalizer in the closing stages but remains mired in the relegation zone after winning only one of its past eight games.

It was the 100th official game in charge of Roma for Zeman, who is in his second spell at the club.

Elsewhere, Fiorentina’s run of five successive victories ended after twice coming from behind to draw 2-2 at Torino.

Roma had lost three of its past four away games but got off to the perfect start when Pescara goalkeeper Mattia Perin could only parry Francesco Totti’s fierce 35-meter free kick into the path of Destro for a simple tap-in.

Destro could have doubled his tally on the half hour, but Perin did well to palm away his header from the center of the area following Totti’s cross.

Destro had another two great chances in the second half, skying his first effort over the bar before firing straight at Perin from close range with only the goalkeeper to beat.

Elvis Abbruscato could have leveled at the end, but his effort was deflected out by Roma defender Ivan Piris.

In Turin, Fiorentina fought back for a point thanks to a late equalizer from substitute Mounir El Hamdaoui but lost Alberto Aquilani and Luca Toni to injury in the first half.

Toni went off after feeling the after-effects of a nasty clash of heads with Kamil Glik, which resulted in the Torino defender being carried off after appearing to briefly lose consciousness.

Alessio Cerci, who is on loan from Fiorentina, gave Torino the lead in the 40th minute as Danilo D’Ambrosio’s cross was allowed to go all the way across the area before being fired in.

Haris Seferovic almost equalized shortly after the hour mark but his effort from a tight angled crashed off the post.

It was back on level terms when Juan Cuadrado was brought down in the area by D’Ambrosio and Gonzalo Rodriguez stepped up to fire home the resulting spot kick.

Torino restored its lead moments later in somewhat comical circumstance as Valter Birsa’s cross evaded everyone and ended up in the back of the net.

Fiorentina snatched a point six minutes from time when El Hamdaoui, who had only been on the pitch for less than two minutes, smashed home the equalizer.

Genoa is out of the relegation zone after ending a run of six successive defeats with a 1-0 win at Atalanta.

Andrea Bertolacci scored the only goal of the game in the 39th minute to hand Genoa its first win in 10 matches.

Genoa’s Emiliano Moretti was sent off for a second yellow card four minutes from time.

Bologna has slipped into the relegation zone after losing 1-0 at Sampdoria.

It played almost the entire match in 10 men after Archimede Morleo was sent off in the fifth minute for bringing down Mauro Icardi as the Sampdoria striker was about to run clear through on goal.

Andrea Poli, who scored his first Serie A goal last weekend, grabbed the only goal of the game in the 61st, playing a one-two with Eder before firing past Bologna goalkeeper Federico Agliardi.

Substitute Chievo striker Mamadou Samassa was sent off five minutes from time after picking up a second yellow card for a dive in the area.

TOKYO (AP) — With calls for a cancellation mounting, pressure is building on Japanese organizers and the IOC to explain exactly how they plan...

This 7-Eleven store got a gaming makeover, and I want to spend the night

Image: 7-Eleven If you reside in Dallas County, Texas, you have a chance to spend the night in what I think...