“I saw the bite and it’s on the video and I’m sure the league is going to pay attention to that,” Canadiens coach Michel Therrien said in his postgame news conference.

Sunday, NHL disciplinarian Brendan Shanahan agreed to look into the case. But Grabovski’s hearing, originally scheduled for Sunday afternoon, was moved back to Monday morning. The NHL Players’ Association requested the postponement.

Max Pacioretty had his arm wrapped around Grabovski’s face while trying to intervene in an altercation between Grabovski and Brandon Prust during the third period. He quickly pulled away his arm and afterward showed a referee his arm. Both Pacioretty and Grabovksi got misconducts in the scrum.

The incident was captured by the Hockey Night in Canada telecast.

Earlier this season, St. Louis Blues forward Chris Stewart said the Columbus Blue Jackets’ Derek Dorsett bit his hand during a fight, but there wasn’t good video of that.

In one of the NHL’s more famous biting allegations, the NHL’s Mike Murphy said he found no conclusive evidence[3] to back Boston Bruins center Patrice Bergeron’s claim that Vancouver Canucks winger Alex Burrows intentionally bit his gloved finger during Game 1 of the 2011 Stanley Cup Final. 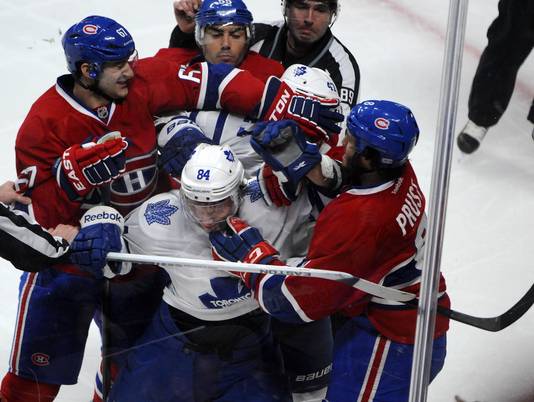 Mike Brehm, a lifelong hockey fan who once drove from Virginia to Winnipeg to see a game, has been hockey editor at USA TODAY since 1993. He has coordinated the hockey coverage of four Winter Olympics, numerous Stanley Cup finals and three lockouts.

Tokyo 2020 can’t seem to catch a break.As if a tenacious pandemic and Japan’s notoriously humid summer heat weren’t enough for the Olympics organizers...

Jill Biden, the first lady, clapped and waved on Friday as a contingent of masked American athletes joined the opening ceremony of the Summer...

The Olympics Begin on NBC With Abstract Imagery, Drones and Dancing

The pandemic-era Tokyo Olympics began on NBC, with an uneasy balance of news and sports, along with reminders that this is big business.The Olympics...