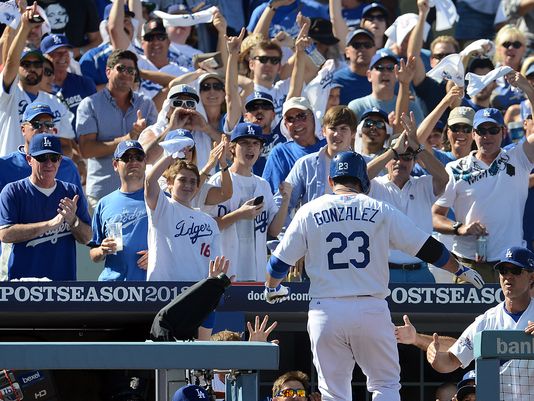 Oh, there are few teams better in the planet when playing elimination games, but when they have that fat lead, they play like fat cats.

And once again, given a chance to end this National League Championship Series, pulling the plug on the Los Angeles Dodgers’ season, they decided to give them mouth-to-mouth resuscitation.

The Dodgers, with a 6-4 victory over the Cardinals, still trail the NLCS 3-2, with the series headed to St. Louis.

The Cardinals still are in fabulous shape.

The trouble is that the Cardinals have been in this identical situation three times in the last 18 years.

The other two times didn’t go so well.

In fact, if you want to be technical, the other two times were utter disasters.

The Cardinals blew their 3-1 lead in 1996 against the Atlanta Braves, and then did the same last season against the San Francisco Giants.

Here’s a stat that sends shivers down the spine of Cardinals Nation.

The Cardinals, after being up 3-1 in the NLCS, have now proceeded to lose seven in a row.

That’s not a baseball score.

The Cardinals should have be popping champagne and partying in the Dodgers’ house.

Instead, they are going home for Game 6 on Friday at Busch Stadium, with the daunting task of facing Cy Young winner Clayton Kershaw.

An ultra-competitive Kershaw who refuses to let the Dodgers’ season expire under his watch.

Cardinals manager Mike Matheny certainly made his team aware of the need to close it out Wednesday, but somehow, the message got lost in the middle of the party favors.

“We’ve been very clear about the urgency,” Cardinals manager Mike Matheny said. “Not that we had a lack of it last year, as much as just let’s remember, and a realization of how quickly that can change.

“Not to take anything for granted. Just keep playing the game.

“Don’t get too far ahead, but also don’t like in the past.

“Remember what happened, learn from it, and let’s see if we can change the course.”

Well, they’ve now got another game to learn from it.

And two chances to get it right.

The Cardinals, who still have ace Adam Wainwright in their back pocket for Game 7, will spend the plane ride home belaboring their squandered opportunities.

Twice, they had Cy Young winner Zack Greinke on the ropes.

And twice, the Cardinals went down for the count.

The Cardinals had the bases loaded with nobody out in the first inning, and came away empty-handed.

They had runners on the corners in the third inning, and couldn’t score again.

Cardinals catcher Yadier Molina was responsible for killing both rallies, grounding out into inning-ending double plays.

Somehow, he made four of the Cardinals’ first nine outs.

Greinke, appreciative of the gesture, took it from there.

He proceeded to calmly retire the next 13 batters in a row.

He was so dominant that only three batters even hit the ball out of the infield.

Greinke departed after seven innings, and who knows, might be available out of the bullpen if they can stretch the Series to seven games.

The bullpen picked up where Greinke left off in this game, with Brian Wilson again continuing his dominance this postseason. He has pitched 17 2/3 innings this postseason, and hasn’t given up a run.

Yet, this day belonged all to Greinke.

He was in deep trouble before most of the Dodgers’ crowd of 53,183 were even in their seats. Matt Carpenter led off with a single. Carlos Beltran walked on four pitches. Matt Holliday dropped in a flair single in front of left fielder Carl Crawford.

Left-handed power hitter Matt Adams was up with the chance to break the game open before it began. He went down swigning.2-

Molina, an MVP candidate, was up next. He hit into a grounder to third baseman Juan Uribe, who stepped on the bag, and threw to first, for the double play.

Just like that, Dodger Stadium was alive, and so was their team.

Greinke, who not only was dominating the Cardinals at the plate, then showed them how to hit. He hit a two-out, run-scoring single in the second inning for a 2-0 lead.

Greinke coughed up the lead in the third when he gave up a run-scoring triple to Carlos Beltran, and a run-scoring double to Matt Holliday, tying the game at 2-apiece. Adams then reached base on a broken-bat single, putting runners on the corners.

Molina, up for revenge, then hit into another double play.

That was the end of the Cardinals, who then watched the Dodgers’ power show the rest of the game. The Dodgers hit four solo home runs, tying a postseason franchise record, accomplished last in the 1978 NLCS.

“We’re all lined up,” Dodgers infielder Nick Punto said. “The pressure is all on them now.”

And if the Dodgers win Game 6?

“We get it to Game 7,” said Dodgers first baseman Adrian Gonzalez, “those things will creep in their heads over there.”

Then again, the Dodgers have their own history.

Something has got to give. The Redemption of Ryan Leaf Will Be Televised

Back to College Dorm Rooms

D.C. radio station named itself after RG3 this weekend