DeAndre Jordan needs to be big for L.A. Clippers 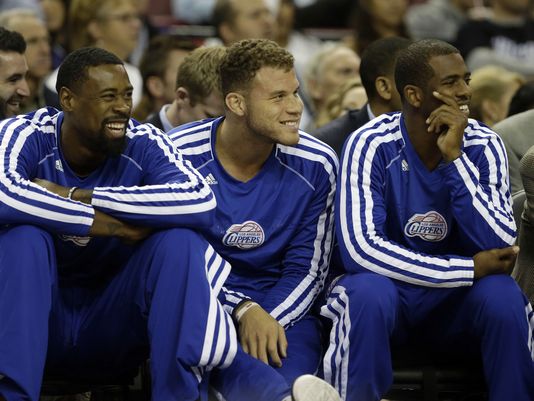 The day may come when Los Angeles Clippers center DeAndre Jordan runs down the floor, turns back to see what point guard Chris Paul has in store, and hears one of the play calls that always make his eyes light up.

Floppy Five. Or, perhaps, its twin brother Turn Five. These are the plays he dreams of, the ones where the 25-year-old uber-athlete gets to show off his offensive skillset in ways typically reserved for the likes of Paul, fellow star Blake Griffin, super sub Jamal Crawford or one of the Clippers’ other many threats. But as new coach Doc Rivers & Co. embark on what should be a fascinating journey this season, this fork in the road they face between being a real title contender or perennial playoff failure, they’re finding hope in the fact that Jordan doesn’t seem to care whether his number is being called anymore. It is, they believe, a sign of the sort of maturity and mutual understanding that wasn’t here before.

“He’s been in double figures (in scoring) offensively every game, and we’ve yet to run a play for him,” Rivers told USA TODAY Sports before the Clippers played at Phoenix on Tuesday night. “In the past, (not having a play called for him) would have bothered him, and then that would have taken away from his real job. And now, you can see him not thinking about it.

“If he gets passed up, he gets passed up on offense and he just keeps playing defense. But I think it’s really fun and nice to see him enjoying that end and understanding the impact he has on our team.”

Jordan’s is a nuanced subplot to their collective tale, but one that’s as vital as any in this time when the need to upgrade this operation is so great. Rivers was a no-brainer improvement at the coaching spot, the former Boston Celtics coach taking the job previously held by Vinny Del Negro, who – regardless of fault – had seen Jordan’s spirit completely sapped while on his watch.

The lack of offensive involvement didn’t bother Jordan nearly as much as those fourth-quarter disappearing acts that were worthy of a Criss Angel show. Del Negro deemed Jordan’s woeful free throw shooting (38.6%) so much of a liability that he made him a three-quarter player, and the high-flying Lob City resident would get grounded nearly every time the final period came around. He played in the fourth quarter just 30 times in 82 games, averaging five minutes per on those rarest of instances.

Among centers who played in at least 60 games and averaged at least 20 minutes per game last season, Jordan’s free throw percentage was worse than everyone but Detroit’s Andre Drummond (37.1%). Yet when looked at from a certain perspective – perhaps when considering that infamous free throw bricker Dwight Howard, then of the Lakers, averaged a hearty 9.2 minutes in the fourth in 71 games and even Drummond averaged 7.2 fourth quarter minutes while playing in 55 of his 60 games – one can understand why he would take Del Negro’s ways personally.

The context of Jordan’s contract was surely adding more pressure, as he was hardly looking worthy of the four-year, $43.2 million deal he signed in Dec. 2011. The numbers never paint the whole picture, but Jordan’s production – 8.8 points, 7.2 rebounds, 1.4 blocks and 24.5 minutes per game last season – wasn’t pretty.

This big man meltdown mattered because, in this three-star day and age in the NBA, the Clippers had Paul and Griffin & little room for error everywhere else. Their formula was good for a franchise-record 56 wins, but a six-game loss to the Memphis Grizzlies in the first round marked the second consecutive postseason in which they finished on a four-game losing streak that left everyone searching for answers (they were swept by San Antonio in the second round the year prior). Jordan, for the record, sat in four of the six fourth quarters against the Grizzlies.

For his part, Rivers is the badly-needed answer on the bench that could help the Clippers survive all the way into June. There is an early vow from the coach to play him in fourth quarters, with Rivers well aware that a team hasn’t needed a Jordan revival this badly since Michael was trying to carry the Washington Wizards.

Rivers considers Jordan an All-Star caliber talent, even comparing him to football great Deion Sanders with his dynamic ability to dominate on the defensive end. He’s no Kevin Garnett, the former Boston Celtics big man and Rivers favorite who looked headed for the Clippers in exchange for Jordan in June before the NBA reminded all involved that a coach can’t be traded for a player, but he sees him as special.

“He’s an All-Star, and whether he makes it or not I could care less about that part but I’m just saying that he’s at that level,” Rivers said. “DJ has the ability to affect an entire end of the floor. So how good was Deion Sanders? That’s how good DJ is. That’s the way I look at it.”

There is a promise from the player that he will dominate defensively and let the rest sort itself out. There is, for now, cohesion and a rising confidence again. And there is Jordan, in the early goings, doing it all without paying any mind to play calls. In the first three preseason games in which he played, he totaled a combined 41 points (17 of 23 shooting), 26 rebounds, and 15 blocks – yes, 15 – in 74 minutes.

“He believes in his players, and it’s not like it’s just something he’s saying,” Jordan told USA TODAY Sports about Rivers. “He really believes it. He just puts that confidence in not only me but everybody here. That’s huge, when not only you believe in yourself but your teammates believe in you and it comes from the top. And he’s a Hall of Fame coach, and he believes in me, so that just takes your game to a whole new level.

“He kept reiterating that, and it made me feel comfortable and even more confident when I’m out there playing. From Day One, he put a big task and a big goal in my head. I’m accepting that challenge and am going to embrace it and work as hard as a I can to make it happen.”

No one wants the Clippers to evolve – to grow up, you might say – more than Griffin. The fourth-year forward has had a challenging enough evolution of his own, trying to grow his own game while meshing with an older player in Paul who can be so relentlessly demanding. He needs Jordan to fill this role, and to feel fulfilled. So far, Griffin said, so good.

Or, of course, the play call.

Dorktown: The 1976 Oakland A’s stole nearly a mile worth of bases vs. one team

Media Club: Remembering the time 21 Savage whispered through a song

Analysis: Biden faces a more confident China after US chaos

BEIJING (AP) — As a new U.S. president takes office, he faces a determined Chinese leadership that could be further emboldened by America’s troubles...

Tánaiste Leo Varadkar, Ireland’s Minister for Enterprise, Trade and Employment has announced that both public and private sector workers will be allowed to request...