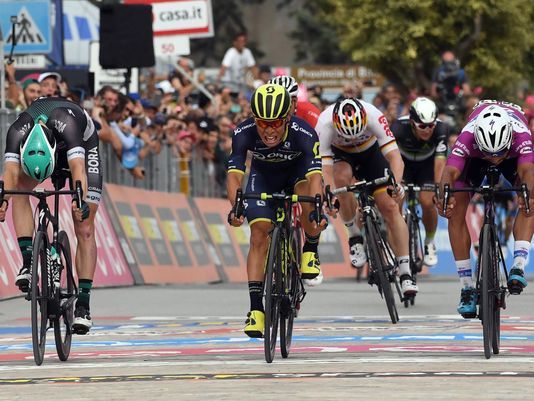 Australia’s Caleb Ewan, center, sprints ahead of Sam Bennett, left, and Fernando Gaviria, to win the 7th stage of the 100th Giro d’Italia, Tour of Italy cycling race, from Castrovillari to Alberobello, Italy, Friday, May 12, 2017. (Alessandro Di Meo/ANSA via AP)(Photo: The Associated Press)

ALBEROBELLO, Italy (AP) — After three top-10 finishes in the opening week, Caleb Ewan of Australia finally won a stage in the Giro d’Italia on Friday.

The Australian rider with the Orica Scott team claimed Stage 7 in a sprint finish for his first career Giro victory while Bob Jungels held on to the pink jersey.

Ewan finished half a wheel ahead of Colombian rider Fernando Gaviria to erase memories of his second-place result in Stage 1 and ninth- and eighth-place finishes in Stages 2 and 3, respectively.

“It feels so good after the first few disappointments I’ve had. I don’t think I’ve felt so good before,” Ewan said.

Ewan also won a stage in the Spanish Vuelta two years ago.

Sam Bennett of Ireland crossed third while sprinting standout Andre Greipel was fourth after the mainly flat but lengthy 224-kilometer (139-mile) route from Castrovillari to Alberobello, which featured an undulating final 40 kilometers.

Jungels, of Luxembourg, maintained his six-second advantage over Geraint Thomas of Wales. Fellow Briton Adam Yates remained four seconds further back, with most of the overall favorites.

“It’s not a disappointment for our team to not win with Fernando Gaviria today, because he did a great sprint and the team helped him,” Jungels said. “It’s no shame to lose against Caleb Ewan who is very fast.”

Located in the southern region of Puglia, Alberobello is known for its trullo dwellings made from white limestone with conical roofs, and is designated a World Heritage site.

The stage began in the Calabria region and three riders — Simone Ponzi, Dmitriy Kozontchuk and Giuseppe Fonzi — broke away from the pack almost immediately. Ponzi quickly had a mechanical problem, leaving Kozontchuk and Fonzi at the front.

The duo swiftly built a lead of four minutes and stayed in front for five hours before being caught by the main pack with 18 kilometers to go.

There was little other excitement until Slovenian rider Kristijan Koren attacked on an uphill section shortly after the five-kilometer mark.

Team Sky quickly chased down Koren to protect Thomas’ position, then it was whittled down to only a handful of riders contesting the final sprint.

Ewan had the best line coming around the final corner and narrowly held off the charging Gaviria, while Greipel appeared to lack some energy.

“I had to do some work with three kilometers to go so I was a little tired for the sprint,” Ewan said. “But Luka (Mezgec) did a great lead out, so it was perfect.”

Jungels should face more of a test over the next two stages.

Stage 8 on Saturday is a 189-kilometer (117-mile) leg from Molfetta to Peschici that features a short, steep uphill finish. Then a serious climb to Blockhaus comes a day later.

“This year all the finals are tricky,” Jungels said of the concluding kilometers. “All day long it was pretty relaxed and then the last 10 kilometers were crazy.”

Bob Costas comes down on gun control with Jon Stewart 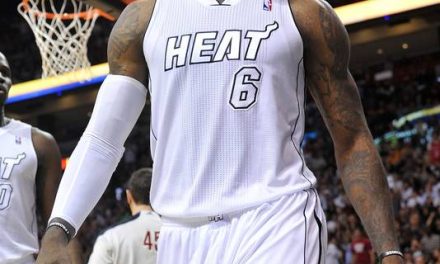