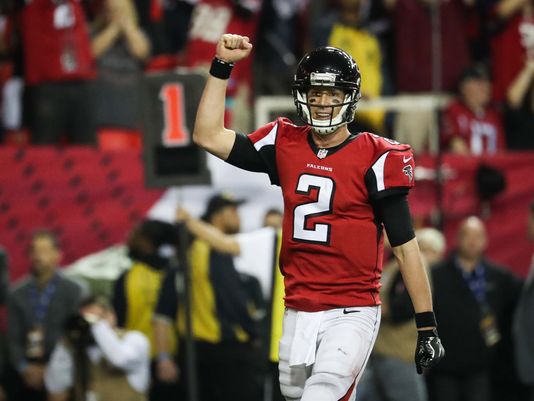 Tom Brady vs. Roger Goodell: The NFL Commissioner has avoided trips to Foxborough, Mass., during the Patriots’ run, but if Brady wins yet another Super Bowl, there will be no more maneuvering[1] after fans chanted for him on Sunday. After doling out a four-game suspension to the legendary QB — one the future Hall of Famer fought arduously in federal court — Goodell could find himself personally handing Brady the Lombardi trophy if the quarterback can lead New England past Atlanta.

Can anyone stop Julio Jones?: The Patriots did a nice job containing Steelers star Antonio Brown (77 yards on seven catches), but now the defense must prepare to stop another top wide receiver. At 6-3 and 220 pounds, Jones presents a much-different challenge than Brown. He torched the Green Bay Packers’ suspect secondary[2] for 180 yards and two touchdowns in the NFC Championship Game. Cornerback Malcolm Butler will likely be tasked with handling Jones for New England. If Jones can replicate his NFC title performance, the Pats are in big trouble.

Lombardi Trophy finally coming to Atlanta?: The Falcons are one of 13 teams never to win a Super Bowl. They’ve been to the big game only once: a 34-19 defeat to the Denver Broncos in Super Bowl XXXIII. Atlanta is starving for a championship parade. The last one? In 1995 after the Braves won the World Series.

One for the thumb: No quarterback has ever won more than four Super Bowls. Tom Brady can break that mark with a victory in Houston and surpass the great Joe Montana. With five rings on his fingers and seven Super Bowl appearances overall – not to mention his sterling playoff record — can anyone then doubt the former sixth-round draft pick is the greatest signal-caller of all time?

The X-Factor: In two seasons, the Patriots are 16-0 when running back Dion Lewis is in the lineup. He’s a difference-maker out of the backfield as a receiver and provides a much different look than the powerful LeGarrette Blount. Lewis is an all-around threat – even on kick returns – who can break a big play at any time, and he helps Brady keep opposing defenses off-kilter.

Is Matt Ryan elite?: The Falcons’ leader has the MVP all but wrapped up after the regular season. He’s been great in the playoffs, too; the Falcons rolled over both the Seahawks and Packers with more than 35 points in each contest. With his 1-4 playoff record entering the new year now a distant memory[3], Ryan will have to knock off an all-time great QB to prove he should truly be counted among the game’s elite.

Falcons’ upstart D:Atlanta’s young defense shined again[4] in the NFC title game, this time against a previously red-hot Aaron Rodgers. Spearheaded by Vic Beasley, who led the league in sacks with 15 1/2, Atlanta’s defense also features an opportunistic secondary. But with a starting group featuring rookie Keanu Neal as well as second-year players Jalen Collins and Ricardo Allen, the unit is thin on experience. But will the massive stage in Houston prove to be too much, too soon?

Revenge for Quinn?: The last time Dan Quinn faced off against Bill Belichick, the Seahawks came up short against the Patriots in a wild Super Bowl XLIX defeat. Quinn was the defensive coordinator for Seattle in the last-second in that game, and now he’ll roam the sidelines in the big game in just his second year as the top guy.

Hogan and Edelman: The Patriots picked Michael Floyd off the scrap heap late in the season and many observers believed he was the big-bodied target New England was lacking with Rob Gronkowski sidelined. But it seems they might not have need reinforcements in the first place. Floyd was a healthy scratch Sunday, and offseason pickup Chris Hogan exploded[5] for 180 yards and two touchdowns. Patriots mainstay Julian Edelman also topped the 100-yard plateau. The two receivers caused nightmares for the Steelers secondary and are poised to create more mismatches in the Super Bowl.

Adam Ondra Finishes Out of the Medals in Olympic Climbing

Because of a complicated scoring system, it was often hard to know who was ahead in this mash-up of climbing disciplines making its Olympic...
Read more
Advertisment

Selena Gomez is calling out television shows that have referenced her 2017 kidney transplant, most recently Paramount Plus’ “The Good Fight.” On Tuesday, the...

Film production in Los Angeles rebounded to pre-pandemic levels in the second quarter of 2021, according to permit data released Thursday by FilmLA. The...

Adam Ondra Finishes Out of the Medals in Olympic Climbing

Because of a complicated scoring system, it was often hard to know who was ahead in this mash-up of climbing disciplines making its Olympic...