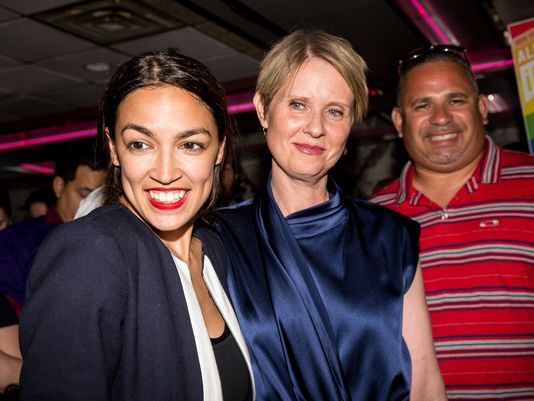 Alexandria Ocasio-Cortez on Tuesday night ousted the man considered most likely to replace Nancy Pelosi as leader of the Democrats in the House of Representatives. But just three days before her surprising win, she took a break from her upstart political campaign to travel to the Tornillo, Texas, tent city that is housing hundreds of immigrant children. Here are six things to know about Ocasio-Cortez:

Where is she from? The 28-year-old was born in the Bronx. Her mother is from Puerto Rico. She attended Boston University, where she earned degrees in economics and international relations, and also spent time working in the office of the late U.S. Sen. Edward Kennedy. After graduating, she returned to the Bronx where she became a community organizer. During the 2016 presidential primary, she worked for U.S. Sen. Bernie Sanders. Nine months ago, she was still working as a server at a restaurant even as she campaigned.

Did she say ‘abolish ICE’?

As a candidate, she joined a number of progressive voices calling for an end to the Immigration and Customs Enforcement agency. She hashtagged many of her tweets from Tornillo with #abolishICE and included the position on her campaign website[1]: “The Immigration and Customs Enforcement agency was created in 2003, in the same suite of post-9/11 legislation as the Patriot Act and the Iraq War. It’s founding was part of an unchecked expansion of executive powers that led to the widespread erosion of Americans’ civil rights. … ICE operates outside the scope of the Department of Justice and is unaccountable to our nation’s standards of due process.”

What else about her platform?

Ocasio-Cortez is a member of the Democratic Socialists of America, [2]the largest organization of socialists in the United States. Ocasio-Cortez advocates for Medicare for All and a federal jobs guarantee. She has also refused corporate donations and demanded much more severe policing of luxury real estate development.

Who did she beat? U.S. Rep. Joseph Crowley represents New York’s 14th Congressional District, which includes parts of the Bronx and Queens. Crowley has been in Congress since 1999 and hadn’t faced an opponent in a primary election since 2004, when Ocasio-Cortez was just a teenager. He was considered a candidate to become the next House speaker if Democrats win the majority in the House.

“It’s not about me,” Crowley, 56, told his supporters at a campaign party after his loss. “It’s about America. I want nothing but the best for Ms. Ocasio-Cortez. I want her to be victorious.”

How did she do it?

Ocasio-Cortez was outspent by an 18-1 margin during her race but won the endorsement of some influential groups on the party’s far left, including MoveOn,[3] as well as the actress Cynthia Nixon, who is running for governor. Ocasio-Cortez defeated Crowley by 15 percentage points. She told The Associated Press after her victory that she didn’t have enough money to do polling in the race, but felt in her gut that her message had a chance to connect.

What did Trump have to say?

He followed that with a tweet that included, “Open Borders and unchecked Crime a certain way to lose elections.”

The Republican candidate for the office, Anthony Pappas, is running unopposed and had no primary. Pappas teaches economics at St. John’s University.

USA TODAY and Gannett coverage of the 2016 elections