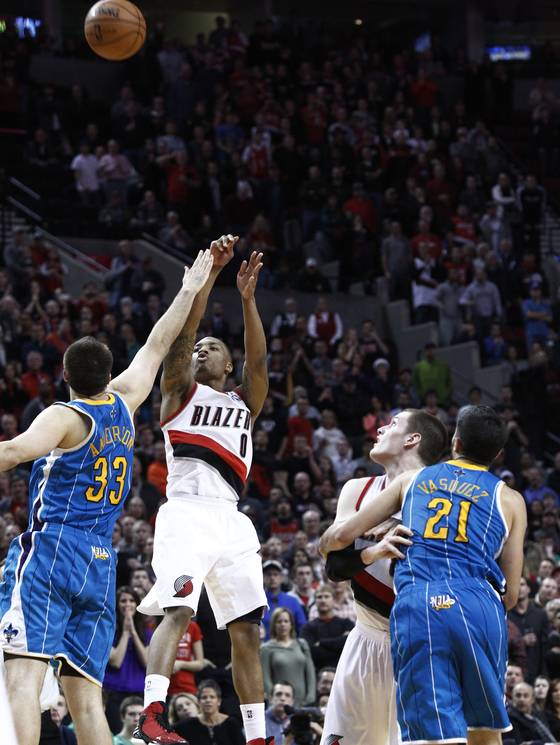 Trail Blazers guard Damian Lillard nails a game-winning three-pointer at the buzzer over Hornets forward Ryan Anderson, left, to give Portland a 95-94 win. Watching at right are the Hornets’ Greivis Vasquez (21), and the Trail Blazers Luke Babbitt.(Photo: Don Ryan AP)

PORTLAND, Ore. (AP) — There was a split-second as his shot arced over a defender’s hands that Trail Blazers rookie Damian Lillard realized his game-winning 3-pointer was going to fall.

“I looked. And it looked good,” he said.

Lillard’s 3-pointer with 0.3 seconds left helped Portland hand New Orleans its sixth straight loss with a 95-94 victory over the Hornets on Sunday night.

After trailing by as many as 16, the Hornets tied it at 92 on Austin Rivers’ 3-pointer with 50.9 seconds left. The Blazers then absorbed a blow when LaMarcus Aldridge suddenly came up limping and headed to the locker room with what appeared to be a left ankle injury, but Lillard came through to give Portland the win.

The winning shot appeared to come at the buzzer but a review put the 0.3 fraction back on the clock. Lance Thomas made an alley-oop layup from Ryan Anderson as time ran out for the final margin.

However, the NBA’s so-called Trent Tucker rule says there has to be at least 0.3 on the clock for a player to gain control of a rebound or inbound pass and shoot a field goal. The only type of field goal which may be scored if the clock is at 0.2 or less is a tip-in or high lob.

J.J. Hickson had a season-high 24 points and added 16 rebounds for the Blazers, who have won three straight. Hickson has five straight double-doubles and 13 overall this season.

Anderson had 26 points, including seven 3-pointers, for New Orleans — so why he didn’t take the final shot was perplexing.

“There was not a lot of time on the clock,” Anderson said. “It would have been tough, I don’t even know if we could have got a shot off in time. Coach was saying you need .04 to get set and get a shot off.”

Aldridge had 20 points before leaving the game and the team later said that X-rays were negative. Lillard finished with 16 points.

“I was excited to win the game. We had a big lead, we let them fight back and tie the game up and we were looking at overtime, so I was kind of relieved and excited at the same time,” Lillard said.

Wesley Matthews, who hit a 3-pointer to open the night for the Blazers, was making his return to the starting lineup after missing two games because of a strained left hip. The injury put him on the bench in street clothes for the first time in his four-year NBA career. He had played in 250 straight games, second-most among active players behind Oklahoma City’s Russell Westbrook.

Matthews was replaced by Victor Claver less than five minutes into the game and did not return. The Blazers said there was no specific injury, he just “didn’t feel right.”

Lillard stole the show in the battle of the rookies with Anthony Davis.

Davis, the top pick in last June’s draft, is still getting his legs back after missing 11 games with a left ankle injury. In the first three games off the bench since his return, he averaged 11.7 points and 6.3 rebounds for the Hornets.

Against the Blazers he had 15 points. Before the stress reaction in his ankle, Davis was averaging 16 points and 8.3 rebounds.

Lillard, the sixth overall pick in the draft, has been the Western Conference’s rookie of the month for both October and November, and was leading all rookies with an average of 18.9 points going into Sunday night’s game.

Hickson pushed Portland’s first-half lead to 51-38 with a layup and the Blazers went into the break ahead 54-43.

Aldridge’s dunk made it 67-53 midway through the third quarter. But it was Hickson’s 11 points that helped put the Blazers up by as many as 16 in the period.

Anderson’s putback layup closed the Hornets to 82-75 with 7:55 left, but Luke Babbitt answered for the Blazers with a 3-pointer.

NOTES: Earlier Sunday, the Hornets signed forward Dominic McGuire to shore up their frontcourt in the absence of Jason Smith, who is out with a right shoulder injury. Smith was injured in the Hornets’ loss at Oklahoma City earlier this week and is expected to be out about two weeks. McGuire averaged 2.1 points and 3.2 rebounds in just over 15 minutes per game for the Toronto Raptors earlier this season, appearing in 15 games before he was waived on Nov. 30. … The Blazers held a moment of silence before the game for the victims of the Sandy Hook Elementary School shooting before the game. It is the second straight game with a moment of silence: On Thursday the team remembered the victims of the Clackamas Town Center mall shooting in suburban Portland. 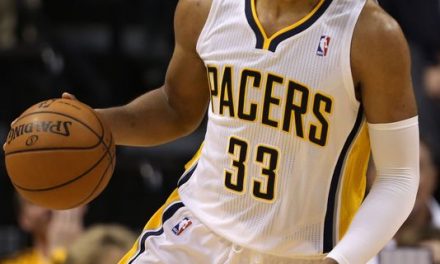 Kravitz: Pacers not ready to beat Heat in playoffs

The Hollow Core of ‘Bad Apples’

One stat shows Rockets shooting against Spurs was historically bad