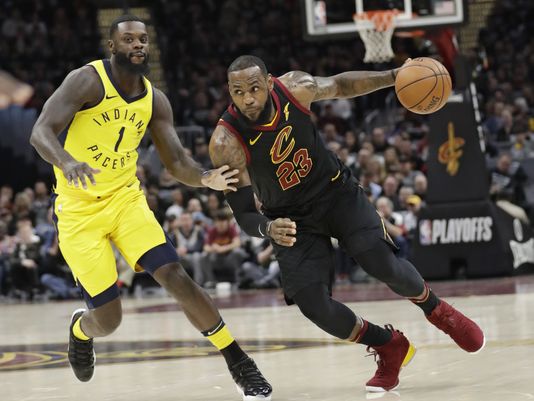 FILE – In this April 29, 2018, file photo, Cleveland Cavaliers’ LeBron James (23) drives against Indiana Pacers’ Lance Stephenson (1) in the first half of Game 7 of an NBA basketball first-round playoff series, Sunday, April 29, 2018, in Cleveland. The appeal for James to stay home is different now than it was eight years ago when he bolted for Miami. He’s more matured, and with three children and a burgeoning business empire, his priorities, responsibilities and goals are different. (AP Photo/Tony Dejak, File)(Photo: The Associated Press)

CLEVELAND (AP) — LeBron James sprung to his feet and screamed along with thousands of delirious Cleveland fans.

When Indians outfielder Rajai Davis connected off Chicago Cubs reliever Aroldis Chapman for a tying home run in the eighth inning of Game 7 of the 2016 World Series, James came unglued and reacted the way he might after a monstrous dunk or back-breaking 3-pointer in the NBA Finals.

And while his fanatical response said a lot about James and his allegiance to the Indians, so did the tight, black T-shirt he wore on that unseasonably warm November night.

It said: “Cleveland Or Nowhere.”

As the sports world waits to see where the three-time champion intends to play next season and beyond, there remains the real possibility that James could choose to stay in Cleveland, his hoops home for 11 of the past 15 years and where this Northeast Ohio son shares a unique and profound connection with fans who have followed him since his teens.

James has other options: Los Angeles (salary-cap space for another star, Magic Johnson in charge), Houston (a chance to play on a super team with MVP James Harden), Philadelphia (young stars Ben Simmons and Joel Embiid), and maybe more.

But, as has always been the case for James, home will pull at his heart.

For the longest time, the perception was that once James ended Cleveland’s 52-year title drought in 2016, he would leave again as soon as he could. That doesn’t seem to be a slam dunk any longer.

By Friday, James is expected to make his first move and likely decline a $35.6 million contract option for next season with the Cavs, who are hoping their past loyalties to the 33-year-old and his own sentimental attachments — family, legacy — will keep him in Cleveland.

Unlike his free-agency forays in 2010 and 2014, James will not meet with prospective teams. He’s letting agent Rich Paul and his other representatives handle the business side of things as he vacations with family and makes up his mind.

But a funny thing happened on the way to the NBA Finals.

James was boosted by general manager Koby Altman’s drastic-and-dramatic roster overhaul at the trading deadline, and despite a lack of cohesion and Vegas odds makers labeling the Cavs as underdogs, Cleveland advanced to a fourth straight summer showdown with Golden State, surviving two Game 7s and sweeping the top-seeded Toronto Raptors along the way.

Of course, James did all the heavy lifting. He played in all 82 regular-season games and had perhaps his best postseason, averaging 34 points, 9.1 rebounds and 9.0 assists while making a pair of buzzer-beating shots and doing all he could in a Finals sweep that could have been much different if Cleveland had not lost Game 1 in overtime.

“He gave his heart and soul, die-hard energy, commitment to this team, to this franchise, to the city, to Northeast Ohio,” Altman said last week after the Cavs drafted Alabama guard Collin Sexton, who quickly raised some eyebrows by choosing to wear No. 2, Irving’s number for six seasons with Cleveland. “It was an historical year and probably one of the best postseason runs of all time. We’re very, very fortunate to have him here and what he gave to this franchise this year was nothing short of remarkable.

“We don’t take that for granted at all.”

And it’s why the Cavs haven’t surrendered from the fight to keep him.

Owner Dan Gilbert, whose relationship with James remains tricky if not rocky, has displayed a willingness to spend whatever’s necessary to keep his team championship competitive. That’s unlikely to change whether James extends his second stint with Cleveland.

In a recent Business Insider podcast, Gilbert referred to James as a “partner,” an acknowledgment by the billionaire to what the superstar he once criticized means to his franchise.

The appeal for James to stay home is different now than it was eight years ago when he bolted for Miami. He’s more mature, with three children and a burgeoning business empire. His priorities, responsibilities and goals are different.

After the Warriors finished their Finals sweep of the Cavs, James revealed an injured right hand but an unchanged view of the next phase of his career.

“I will still continue to be in championship mode,” he said. “When I decide what I’m going to do with my future, my family and the folks that have been with me for the last 20 years will have a say-so. Then it ultimately will come down to me.”

A Fiendish Conversation with Spike Friedman

A Fiendish Conversation with Justin Huertas

The Enduring Enchantment of ‘Wicked’