If you were planning a little January penance, for God’s sake stop reading: It’s pretty much all bourbon-caramel milk shakes and kalua pork–kimchi mayo fries for the next couple pages. Sorry!

Actually, it’s not really my doing. If restaurateur Gary Snyder hadn’t had such screaming success peddling french toast and bloody marys at Geraldine’s Counter[1] by day, he might never have imagined Heyday, where he could stuff those same appetites with burgers and manhattans by night. Likewise if Roz Edison and Kamala Saxton hadn’t spun Spam into gold with their Hawaiian-Korean-taco fusion Marination empire, there’d be no Super Six doing criminally tasty things with pork and kalbi marinade.

The two opened within days of each other last September, in the next-door-neighborhoods of Mount Baker and Columbia City. Heyday, on the Mount Baker–Leschi Ridge, draws more families, and Super Six in downtown Columbia City more young adults—but both are generally packed evenings, drawing on the bottomless appeal of intelligent comfort food.

At Heyday that food is burgers. Snyder lives in the neighborhood and knew it needed a beer-and-burger joint where you could come as you are and bring the brood. He also knew that he wanted a lineup of burgers with actual, discernible variety along with fries as fine as the ones at Ethan Stowell’s Madrona steak house, Red Cow[2]. He hired his pal Melissa Nyfeller, late of the stunning Dinette, to mastermind the menu. Nyfeller found Heyday a bar director, Snyder found a business partner—and the crowds found the place all by themselves.

I found it on a rainy Saturday night, already packed by 6:30 with a thousand children and their weary chauffeurs. The contemporary corner space is finished to stylishly no-nonsense midcentury specs: lots of windows, slatted walls, wood tables, concrete floors. The bar thrums—something’s got to keep the grown-ups happy—and offers, behind it, the only tables approaching serene.

The rest of the room is as deafening as maximum children and minimum upholstery ensure—but then, you didn’t come to Heyday to linger. Even if you did, you won’t. Service is snappy and, once you’ve finished, trained in the art of the loaded hint: “Um…did you want another refill on that water?” Among the snappy staffers is the affable Snyder himself, one of those in-the-trenches owners who has been, since his early days at the laudable El Greco on Broadway, forever wiping a table or hanging a coat.

And yes—his fries are as fine as Red Cow’s, here made with peerlessly flavorful Kennebec potatoes: starchier than most, crispy fun to eat, sometimes over-cooked, and enhanced with the welcome snark of malt vinegar aioli. (The onion rings, by contrast, are greasy and doughnut sweet.) Another yes on the sufficiently differentiated burgers—Heyday lets you design your own, but Nyfeller’s eight combos are vivid and often unexpected. The bison burger featured bitter and sweet interplays of grilled apple, radicchio, red onion, maple syrup, Beecher’s sharp cheddar, and mustard seed sauce; mine could’ve dialed down the mustard and dialed up the syrup. The Saigon burger amounted to a beef-pork-shrimp patty with pickled daikon and carrots, sriracha aioli, fresh cilantro, and, ostensibly, mint (which I didn’t taste at all); the verde burger a hunk of grass-fed beef piqued with roasted poblano, hatch green chili relish, queso fundido, and chipotle aioli.

They’re about the size of a fist—seemingly diminutive until you’re halfway through—and drip-down-your-arm juicy. My favorite was the bacon bleu—its triple cream cambozola making pretty music with bacon jam and the Big Mac–like Heyday sauce.

If “bacon jam” rings a bell, it’s fitting—Heyday sophisticates family-casual comfort food in the way Skillet[3], the Airstream trailer–gone-diner, invented around here. And so you’ve got your brainy cocktails (the Hey-Dazed manhattan’s liqueurs offering a wintry, chai tea–like take on the classic), your adult milk shakes (the aforementioned bourbon-caramel, really boozy and really filling), your vegetal intrigue (blackened cauliflower with roasted red peppers and onions, and almonds for crunch, over lickable romesco), your delectable-sounding desserts (which in fact amounted to underwhelming ice cream sundaes, alas).

As it happens, Super Six down the road traffics in most of the same categories, only with variously Asian accents. At first glance, the former auto-body shop with the raw-timbered, barrel-vaulted ceilings telegraphs old-school Americana: a diner counter with bar stools, vintage portable fans, TVs with the game on, Buddy Holly and Sam Cooke in heavy rotation, a barnlike loft in the rafters, and that trippiest nostalgia trip of all—a free parking lot.

A glance at the menu, however, reveals that the kitchen is actually a lab for inventive Asian fusion, heavy on the aloha, with dishes like shrimp poke with kimchi and roasted squash and grain salad with lemongrass. In all of Marination’s outfits—the original award-winning truck, the drop-in Marination Station on Capitol Hill, the summery Marination Ma Kai on the West Seattle shore—it’s the patented synthesis of those two visions, comfort Americana and pan-Asian, that brings the magic. Super Six is the most restauranty of the lot, with its all-day format and (evening) table service, not to mention larger size.

Super Six’s menu is also the most substantial. Edison and Saxton hired chef Chad Bergman (Miller’s Guild[4]), whose calling card is clearly powerhouse flavors and preparations with the full courage of their convictions. Garlic fried rice—with vegetables and shreds of kalua pork and topped with scallions and a fried egg—breathes its heady pungency across the whole meal. Pork ssam (one of the large plates which, paired with a few starters, will feed the table) is a platter of unctuous pork shank served in the Korean style, which you assemble with sides (greens, scallion relish, the Vietnamese fish sauce nuoc cham) into delectable packages. The Six Burger—unbelievably, the maiden burger of the Edison-Saxton empire—is intensely meaty, with sweet pickles and kalbi-grilled onions on a potato bun. Served with limp fries.

This food’s mostly not brain science—what isn’t sweating garlic and ginger is drenched in egg yolk—and you’d make it yourself if you had ideas this cool. Aloha fries may be the guilty pleasure of the year: a mess of (crispy!) fries drizzled with kimchi mayo, scattered with scallions, heaped with shreds of kalua pork, and lushly crowned with a fried egg. I sort of loathed myself for liking a quesadilla version of Hawaiian pizza—country ham, jalapeño, pineapple, sharp cheddar, cilantro, crema—probably because in satisfying such Taco Bell–y cravings for crispy and melty and creamy, it triggered reflexive fast-food shame.

But the Marinations are critically and popularly beloved precisely because they satisfy that most base human craving, through food that’s actually food. Cuisine, even. I’m thinking now about a salad that establishes Bergman’s chops in the novel-ideas department: a big platter of crunchy greens, five-spice walnuts, tart apple slivers, and (over-cooked) herb-roasted chicken, in a lime-brightened dressing ricocheting across a multitude of herbs. An inspired mix of collaborative but not obvious flavors, this one stayed fascinating to the bottom of the plate—again like Skillet, I realized over lunch at the diner counter one day.

In contrast to Super Six’s hyperactive scene by night, where my table in the loft during a televised Sounders game sounded like seats at the goal zone, lunchtime was crickets. How long will it take for the neighborhood to catch on to this place by day? I wondered, idly crunching into one of the balls of fried dough, or malasadas, Super Six serves for dessert. Sugarcoated crunchy on the outside and featherweight within, the warm pastry oozed rich coconut cream.

Is there a civil fraud case against Lance Armstrong?

A Long Way to Aragona 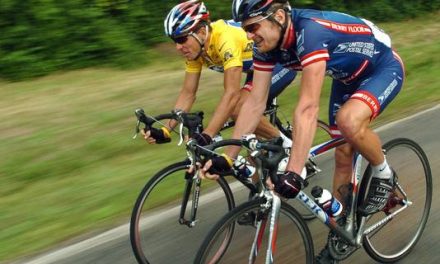