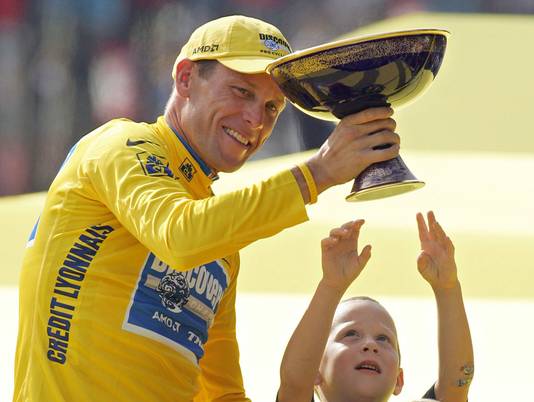 After Lance Armstrong won his seventh consecutive Tour de France, in July 2005, his son Luke tries to touch the trophy. Armstrong, in his January interview with Oprah Winfrey, said having his son deal with all the reports and rumors regarding his dad’s alleged doping finally persuaded Armstrong to come clean with the extent of his deceit.(Photo: Peter Dejong, AP)

An insurance company in Dallas has filed suit against Lance Armstrong seeking the return of $12 million in bonuses and fees the cyclist was paid for winning the Tour de France.

If he chooses to fight, he would appear to be trying to keep $12 million that he won with the help of admitted cheating and lies under oath.

“By now, everyone knows that Lance Armstrong perpetuated what may well be the most outrageous, cold-hearted and elaborate lie in the history of sports,” says the lawsuit filed in Dallas.

Armstrong’s attorney, Tim Herman, told USA TODAY Sports last week that Armstrong did not plan to pay the money back in part because there was no precedent for an athlete returning a paycheck even when found guilty of wrongdoing. He also said the case is closed and cannot be reopened under terms of a settlement Armstrong previously reached with SCA.

MORE: Armstrong attorney says he won’t pay it back[2]

The case stems from bonuses that were owed to Armstrong as part of his contract with Tailwind Sports, the management company of his cycling team. Tailwind had the bonuses insured by SCA Promotions, a company that indemnifies sports-related businesses against losses. After Armstrong kept winning the Tour, Tailwind made claims on that policy to have SCA cover the bonuses.

But then SCA got suspicious. The company wanted to investigate allegations that Armstrong might have been cheating to win the Tour by using performance-enhancing drugs. Suspecting fraud, SCA withheld the bonus payment owed to Tailwind and Armstrong in 2004.

In response, Armstrong and Tailwind filed suit against SCA for payment, citing breach of contract. Armstrong’s representatives even took out a full-page advertisement in Sports Business Journal, which accused SCA of “a shameful and baseless breach of contract.”

SCA said it lost a “substantial amount of business” because of the ad.

Armstrong’s lawsuit against SCA led to the deposition testimony of various witnesses, including Armstrong, who denied under oath in 2005 that he used performance-enhancing drugs.

“How many times do I have to say it?” Armstrong asked SCA attorney Jeff Tillotson. Armstrong testified he “never” took performance-enhancing drugs. He also testified, “I race the bike straight up fair and square.”

After Armstrong’s denial, SCA paid Armstrong and Tailwind a $7.5 million settlement. As part of that settlement, SCA agreed that it could not reopen the case — a point that Armstrong’s attorneys will use in an attempt to have this case dismissed.

SCA’s suit names Armstrong, Tailwind and Armstrong’s agent, Bill Stapleton, as defendants. The suit states that Herman told an arbitration panel in the previous case that if Armstrong’s Tour de France titles ever were stripped, “then Tailwind agrees to refund any payments made.”

Last year, Armstrong was stripped of all seven of his Tour titles from 1999 to 2005 after the U.S. Anti-Doping Agency released a massive file of doping evidence against him. In a televised interview last month with Oprah Winfrey, Armstrong admitted to using banned drugs or blood transfusions during all seven of those victories. It was a direct contradiction of his testimony in the SCA case in 2005-06.

SCA now wants a refund of $9.5 million in bonus money it paid for Armstrong’s wins in the 2002, 2003 and 2004 Tour de France, plus $2.5 million in legal costs and fees. Tillotson said he believes Armstrong’s lies under oath in 2005-06 won’t bring perjury charges because the statute of limitations has expired.

According to the suit, the previous settlement should be vacated because it was based on a fraudulent legal proceeding. In the suit, the company notes how Winfrey showed Armstrong the video of his denials under oath to SCA in 2005. Winfrey asked him if his responses to those questions under oath would be different today.

“My responses on most of these things are going to be different today,” Armstrong told Winfrey.

Tallulah’s: Classy, Glassy, and All Grown Up

Is there a civil fraud case against Lance Armstrong?