Some hotels are helping those who are seeking a few private hours.(Photo: Suzy Parker, USA TODAY)

Robert C., a New York City banker, is divorced with children. So is his girlfriend. Which means that finding the right time and place to get intimate can get complicated.

Recently, Robert whisked her off to the trendy Flatiron Hotel in Manhattan for an afternoon romantic rendezvous. It cost him $145 to rent the room for a few hours in the middle of the day.

Robert, who asked that his full name not be used because of the personal nature of his experience, found the room on a new website called Dayuse-hotels.com that lets people book boutique hotel rooms in New York City for a few hours midday. “How about a naughty nap in a sexy hotel with your sex partner?” the website playfully asks.

“It was perfect,” Robert says. “This was an opportunity to spend some time together.”

The website, out in time for Valentine’s Day, throws out into the open what many business travelers — and businessmen and women — have likely been doing for years: slipping off to a hotel for an afternoon tryst.

“This is a business that all hotels have, but a lot of people keep it hush-hush,” says Yannis Moati, regional manager for Dayuse-hotels.com, which made its debut in France in 2010 before arriving here six months ago.

The travel industry has always been an avid promoter of romance. A new U.S. Travel Association survey of 1,100 U.S. adults found that 72% of them believe traveling inspires romance. The industry group, not surprisingly, recommended that lovers give each other a trip this Valentine’s Day rather than chocolates.

But sometimes, there’s an illicit nature to romance on the road. Being on the road has long been associated with different “road rules” that open the way to infidelity or random hook-ups. Think of the 2009 film Up in the Air, starring George Clooney and Vera Farmiga, about two people who carry on an affair while traveling for work.

Although there’s no definitive data on how many business travelers get into romantic entanglements on the road, therapists and relationship analysts say it happens frequently among single people and married ones. They can be one-night stands or long affairs. They can be with co-workers, friends or strangers.

Gail Saltz, an associate professor of psychiatry at the New York Presbyterian Hospital Weill-Cornell School of Medicine, says people take on different personas when they’re on the road. When alcohol is flowing at a hotel bar, many travelers let their guards down.

“There’s the feeling that you have a different identity when you travel,” she says.

Whatever the circumstances, romances can potentially have damaging consequences if they involve infidelity.

“Why are people cheating on the road all the time? It’s safe, they can’t get caught, nobody will see them, and they get the opportunity to basically alleviate the guilt on an airplane ride or car ride home,” says David Wygant, a relationship expert and coach in Marina Del Rey, Calif.

Akie Davis knew it was wrong but he began cheating on his wife while traveling for work because it was easy.

“A lot of times, when the company pays for you to go to these exclusive places with great scenery, you’re away from everything,” says Davis, 42, of Houston. “You kind of wish your spouse was there. And they’re not.”

A co-worker and former girlfriend was there instead of his wife on one particular work trip. One thing led to another, he says, and the two ended up together. Their affair lasted a year, and their liaisons only took place when they were on the road.

Now divorced and author of Black Man’s Version To Exhale, he recalls regretting each time he cheated on his then-wife.

“I felt shame. I was embarrassed,” he says. “It was a very guilty feeling, especially when I had to come back home knowing about the infidelity.”

He is now engaged to another woman. He still travels for work, but he does not cheat on his fiancée. “It wasn’t worth it,” he says of his affair.

Guilt can be one consequence of having an affair while traveling, but Jane Greer, a relationship expert and author of What About Me? Stop Selfishness From Ruining Your Relationship, says another danger is that you end up hurting the person you had the tryst with.

“You may consider it a one-night thing and a light-hearted casual thing, but then the person you’re with is more invested in it, and then you’ve really got a messy situation,” she says.

An even messier situation would arise if you brought home a sexually transmitted disease, Wygant says.

“Cheaters tend to not be very careful,” he says. “They love the risk. It’s a thrill to them.”

If that happens, you can probably expect your spouse or partner to find out about the infidelity. “There’s the end of the relationship,” Wygant says.

Even single people run into dangers when they hook up on the road, Saltz says. “We’re sort of living in this hook-up culture,” she says. But “for many people, divorcing sex and their feelings is easier said than done.”

If the romantic encounter involves co-workers, there could be legal implications.

Anthony Oncidi, partner and co-head of the California Labor and Employment Law Group at law firm Proskauer in Los Angeles, says if the relationship involves a supervisor and subordinate, a break-up could be fraught with problems. The two could stop communicating, and their work could suffer. Other employees could also claim that the person involved with the supervisor is getting preferential treatment.

Even when two employees are on equal levels, one can claim that the other is harassing him or her.

For that reason, Oncidi says, many companies have non-fraternization policies preventing or at least discouraging office romances.

“The rules regarding non-fraternization and non-dating follow employees on the road,” he says. “When you are traveling for business, you are dragging the workplace with you wherever the travel takes you.”

But there’s not much companies can do if an employee wants to have an affair on the road. It only becomes the company’s business when it involves another employee and there are potential liability issues, he says. 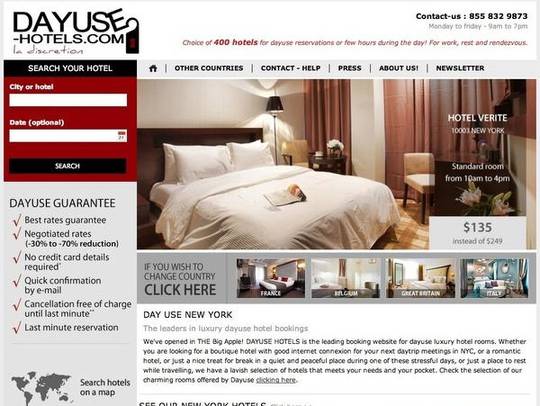 Not just a romantic afternoon

Dayuse-hotels.com originated in Paris, appropriately nicknamed the City of Love.

Moati says demand was strong for people who wanted a hotel for hours at a time. While many couples were renting rooms to get away from their kids and revive their relationships, there were many other clients who weren’t checking in for sexual interludes, he says.

Many clients were businessmen in transit who needed a room for a meeting or to rest before a flight. Others were suburban mothers who wanted to shop and pamper themselves for a day.

“For five or six hours of usage, you get a clean room in a good hotel that’s WiFi-enabled,” he says, of the half-price deals.

The service expanded to other European cities, then to New York. In three years, bookings have gone from 60 a month to more than 300 a day in eight countries. The plan is to take it to other U.S. cities.

Moati says Dayuse-hotels.com is targeting a higher-end clientele with three-star-and-above boutique hotels. So far, 18 New York City hotels have signed up, including the MAve NYC Hotel in the Flatiron District and the Hotel Belleclaire in the Upper West Side.

Hotels like the idea because they can make extra money during the hotel’s downtime.

Benjamin Kaller, director of revenue at the Flatiron Hotel, says the hotel is getting more requests for day-use reservations. The guests check in at 11 a.m. and have to leave either by 4 p.m. or 6 p.m. “It’s a great additional stream of revenue you can make use of,” he says.

He says most seem to be business travelers coming in from a red-eye flight or looking for a place to have a conference call. But he doesn’t really know, he says, because none of the hotel employees are allowed to pry. “We don’t really question guests when they come in,” he says.

Antonio Gabriel, a New York photographer, has rented rooms through the website twice for photo shoots. “I can use it as a place to regroup and do some work,” he says.

With Valentine’s Day coming up, he says he doesn’t think it would be a bad idea to reserve a room for something other than work.

“It’s a pretty cool idea,” he says. “You start your day and around noon, you have lunch and you say, ‘Hell, I want to have a room for a couple of hours.’ Why not?”

Therapists and relationship experts say many travelers who have affairs on the road rationalize it by arguing that if it happens in a hotel or in another time zone, it’s almost like it didn’t happen at all.

“Cheaters can rationalize anything, as long as they can scientifically prove that it didn’t happen in their brain,” Wygant, the dating coach, says.

It’s not just men who feel more sexually liberated when they travel.

“It’s still more common for men to have affairs, but women are better at lying about them,” says Christina Steinorth, a licensed psychotherapist in Santa Barbara, Calif., and author of Cue Cards for Life: Thoughtful Tips for Better Relationships.

Steinorth says fessing up is usually the best policy and doesn’t necessarily mean the relationship is doomed.

“I think if you don’t, your partner is staying with you under false pretenses,” she says. “In all other areas of our life, we are given ‘informed consent.’ We’re informed of all the downsides and possibilities of downsides. Relationships should be no different.”

Not all romances on the road end up in a trail of tears, or involve lying.

Gigi Griffis, 28, a single social-media strategist traveling the world, met a local resident while visiting Thun, a town in Switzerland. The two spent several days hiking together. She extended her trip by a few days. She eventually had to leave, but they keep in touch via e-mail.

“I had a few days of being very sad,” she says. “But also of telling myself that having that experience was worth a little sadness.”

China Cracks Down On Its Tech Giants. Sound Familiar?

Companies like Alibaba, Baidu, and Tencent were once regarded with national pride. Now they’re being slapped with fines and other penalties.China’s Ministry of Industry...
Read more

Why businesses use so much jargon

NO CHILD ASPIRES to a life talking the kind of nonsense that many executives speak. But it seems that, as soon as managers start...
Read more
Advertisment

The wait is nearly over: LeVar Burton begins his stint as a “Jeopardy!” guest host on Monday, July 26. Following a passionate social media...

The legal battle over Britney Spears’ 13-year-old conservatorship continues, as efforts to remove the singer’s father, Jamie Spears, are ramping up. According to new...

Since the 1900s, the state has erected a handful of quirky community gems. From a 60-foot-long squirrel bridge to a teapot-shaped gas station, Washington's...